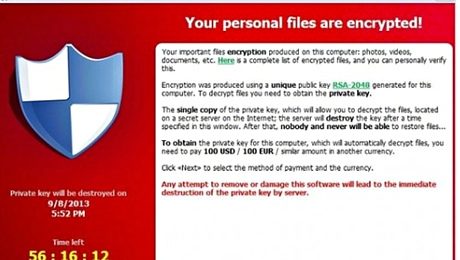 PC users are being warned to be on their guard against emails purporting to be from the Royal Mail and containing CryptoLocker, a malicious piece of software that locks computers with an unbreakable encryption.

The email states that a lost or missing package is waiting for you at your local sorting office and asks recipients to download an attachment to find out more. Those who do immediately start to install the CryptoLocker malware on to their computer, without realising what they have done.

CryptoLocker will encrypt all the data on the computer, including photos, music and personal documents, using a public key.

A message will then appear on the screen stating that all of the data is locked and can only be unlocked with a private key, which the scammers promise to hand over once the computer owner has sent them a payment.

The fraudulent Royal Mail email was discovered when a victim contacted the Action Fraud call centre. It is the second piece of malware hidden in a fake Royal Mail email that has come to light in recent months.

As a result of the scams, Royal Mail has issued advice warning members of the public that it will never include attachments in an unsolicited email, and stating that it does not email its customers asking for any personal information. It has also notified the National Fraud Intelligence Bureau.

“We encourage any customer who receives a suspicious email claiming to be from Royal Mail to contact our customer services department on 08457 740 740,” a spokesperson said, adding that the company follows “robust security procedures” to protect its customers.

Anyone wishing to book a redelivery of a Royal Mail parcel can do so online at the Royal Mail website.

Scammers using CryptoLocker typically ask for ransoms of either $300 or €300, which must be sent through an anonymous pre-paid cash voucher such as MoneyPak or Ukash or the equivalent amount in Bitcoins.

If the extortionists do not receive the payment within 72 to 100 hours, victims are warned the private key will be destroyed and nobody will ever be able to recover their data.

The encryption uses publicly available, well-established algorithms developed by governments and other legitimate bodies that means it is widely seen as unbreakable. When Guardian Money warned readers about CryptoLocker ransomware in October, a spokesperson for security firm Sophos told us that “if you haven’t got back up and you get hit by CryptoLocker, you may as well have dropped your PC over the side of the bridge”.

Since then, it is estimated that more than 250,000 PCs have been infected and the UK’s National Crime Agency has warned 10 million UK-based email users are being targeted.

Only PCs running Windows can be infected but the CryptoLocker malware can be hidden in any executable attachment or sneak on to your computer via a driveby download from a disreputable or infected website.